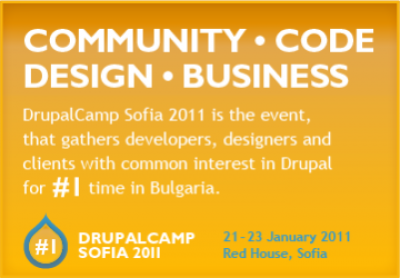 I am not really into the DRUPAL stuff, but I would really like to see where this platform is going. I have never used it and don’t even know what it is capable of but am eager to learn! I also expect to meet a lot of new people and have lot of fun talking about ‘geeky’ internet stuff. I am going there with Antonina Dineva and a coleague of hers, but I expects some guys from initLab to come along, too.

So here is what the official site http://www.drupalcamp.bg says:

Current plans are to have two or three tracks. Large rooms each hold over 100 people, while small rooms hold more than 25 attendees with laptops. Have a look at the proposed sessions: http://www.drupalcamp.bg/en/sessions After we have a *final schedule* – sometime in the week before camp – we’ll need you to update your personal schedule from the sessions that made the cut.